Fuel filters get clogged by all the different particles and debris from the fuel tank walls from the consistent running of your vehicle.

If your fuel filter isn’t working efficiently then it will be unable to remove these impurities and could result in some serious mechanical problems and low mileage performance.

We’ll be taking you through all the symptoms of a bad or clogged fuel filter so you know what to look out for when your fuel filter needs replacing. 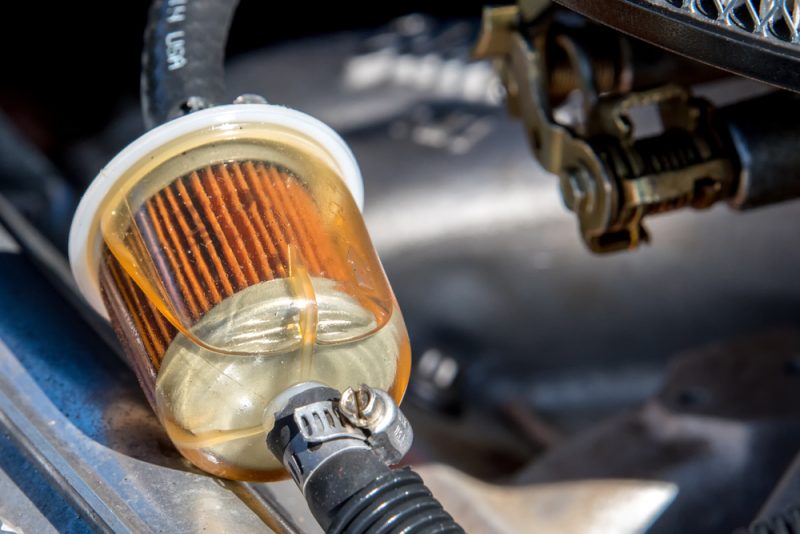 If you’re having trouble starting your engine up, then it can be difficult to determine whether a clogged fuel filter is the route of your problem. Issues starting up the engine can also be due to a dead car battery, broken cables, or a bad alternator. However, it can also mean that the fuel to the combustion chambers is restricted.

You can confirm this by performing a pressure test which will show if the pressure is low or fluctuating which will be caused by a problem with your fuel system. The fuel system covers not only the fuel filter but also the fuel pump and injectors, so you’ll need to check those first and if they are working fine, then the conclusive issue is your fuel filter.

The Check Engine Light has Come On

If you’ve been driving for a long time, then we’re sure you’re familiar with the check engine light on the display by your wheel. This light can illuminate for several reasons regarding issues with your engine. New models of cars have sensors that can produce a specific code relating to certain issues with your vehicle.

If you have a newer car model, check with your vehicle manual to see what specific codes mean, the engine computer won’t throw a code that means that the fuel filter is clogged, but it will produce codes that indicate things like low fuel pressure that can be directly linked to problems with your fuel system.

You’ll need an OBD2 scanner to read these codes, or you can take your vehicle to a car shop and get the mechanics there to read the trouble codes so you can find out what is wrong. Paying a car shop to do this may cost you in some locations.

A clogged fuel filter can also lead to your car frequently stalling. However, it’s best not to just come to this conclusion straight away as stalling can also be a result of a lack of fuel, power, or air. So make sure you’ve got enough fuel in the tank and you’re not releasing the clutch too quickly before you start worrying about the fuel filter.

The issue of stalling may not be starting up your engine as there will still be some fuel in the fuel lines, the problem becomes more apparent when you’re trying to accelerate or take your vehicle up a steep hill as the engine has to work harder, therefore requiring more fuel. However, because the fuel filter is clogged the fuel cannot pass through and get to the engine system, resulting in the vehicle stalling.

A bad or clogged fuel filter will cause the engine to misfire. This means that a problem has occurred in one of the combustion chambers that has caused it to skip a step which then causes the vehicle to jerk and produce a slow delivery of power when trying to accelerate or go up an incline.

However, engine misfire can also be caused by a broken ignition coil, faulty spark plugs, so you’ll need to eliminate these factors before concluding that it is the fuel filter that is the issue.

Bad Odors are Coming from Your Exhaust

If your exhaust is emitting a strong odor then this could be a sign of a clogged fuel filter. This could also be an indication of other internal problems with your vehicle’s elements.

If you start to notice a peculiar odor coming from your vehicle, take it to a professional straight away as you may be able to get whatever the issue is fixed quite easily, or if the problem is serious then you can nip it in the bud before it gets worse and requires some crazy repair costs.

Changes in Your Vehicle’s Performance

If you notice that your vehicle struggles when accelerating, driving up hills, or pulling loads then this could be a sign of a clogged fuel filter. The vehicle will restrict power to prevent damaging the engine due to there not being enough fuel being sent through. The electronic computer on your vehicle should flag up a warning stating that your engine power has been reduced.

This reduced power mode is triggered from a system failure and may not always point to an issue with the fuel filter, however, if this problem corresponds with others on the list, then you can be certain that it is the main issue.

A dirty or clogged fuel filter will prevent the fuel from passing through to the combustion chambers resulting in low fuel pressure. The engine will need additional fuel from the fuel pumps to function properly which will then result in you having to fill up your fuel tank more frequently.

Like many other symptoms on this list, a reduction in fuel economy can also be caused by clogged air-filters, excessive idling, and underinflated tires, so make sure to consider all these factors before assuming it’s a problem with your fuel filter.

How long does a fuel filter last?

Most experts say that you should aim to replace your fuel filter once every 5 years, or for every 50,000 miles that your vehicle does. Although, replacing the fuel filter more frequently can reduce the risk of complications with the system.

If your fuel filter is made of metal, then you can keep up its condition by regularly cleaning it as long as it isn’t too grimy.

How often you replace your fuel filter, will depend on what make, model, and year vehicle you have. The older your vehicle, the more frequent your fuel filter changes should be after so many years of driving, your vehicle will be more prone to the build-up of dirt and debris.

Check your vehicle manual to see when the brand recommends changing the fuel filter.

How much does it cost to replace a fuel filter?

Luckily enough, replacing a fuel filter is not too costly and won’t require too much time to do the job. If you’re clued up on cars and willing to do it yourself, then the replacement fuel filter will set you back anything up to $50, depending on where you get it from.

If you’re not quite sure how to replace a fuel filter, then your best bet is to take it to a local car shop and let them take care of it. However, expect to pay around the region of $150 for the job as labor will need to be taken into consideration as well as the price of the part.

These costs will vary depending on where you decide to get it replaced. If you go to a local shop then you’ll expect to pay less than you would at a dealership, as they tend to ramp up their prices to cover overheads.